About Face: The laughing face will leave you with a smile! 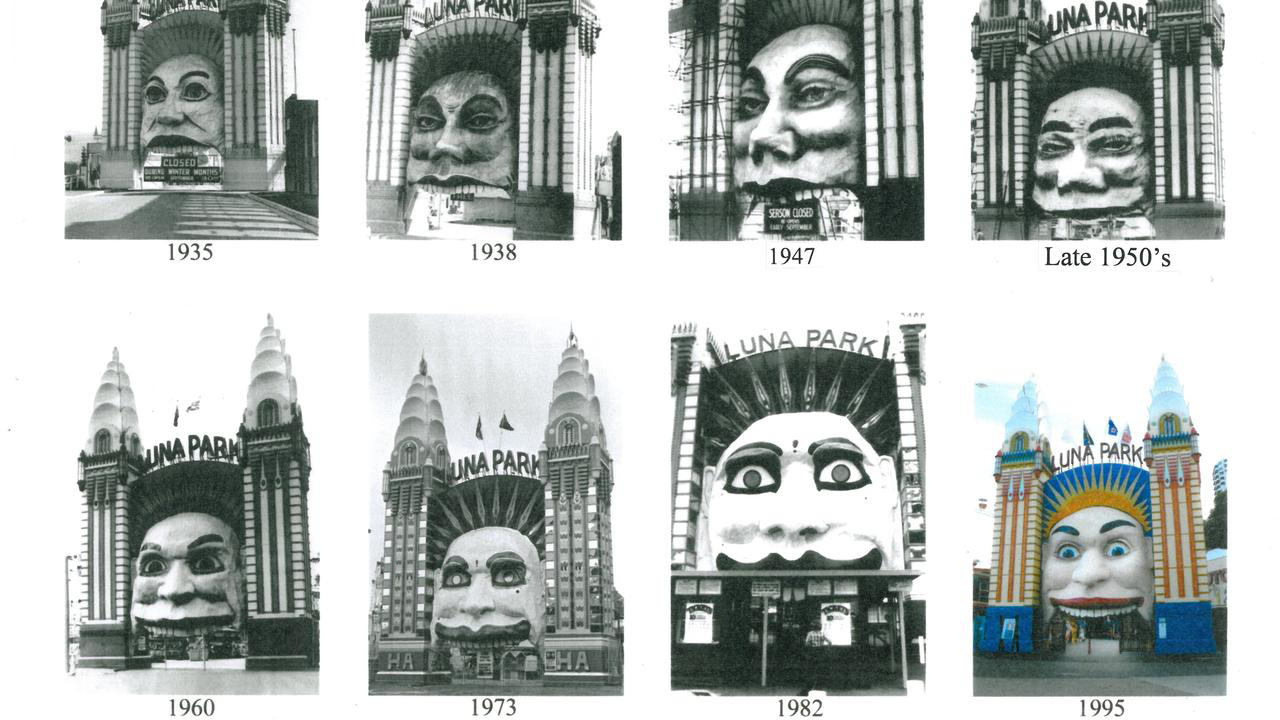 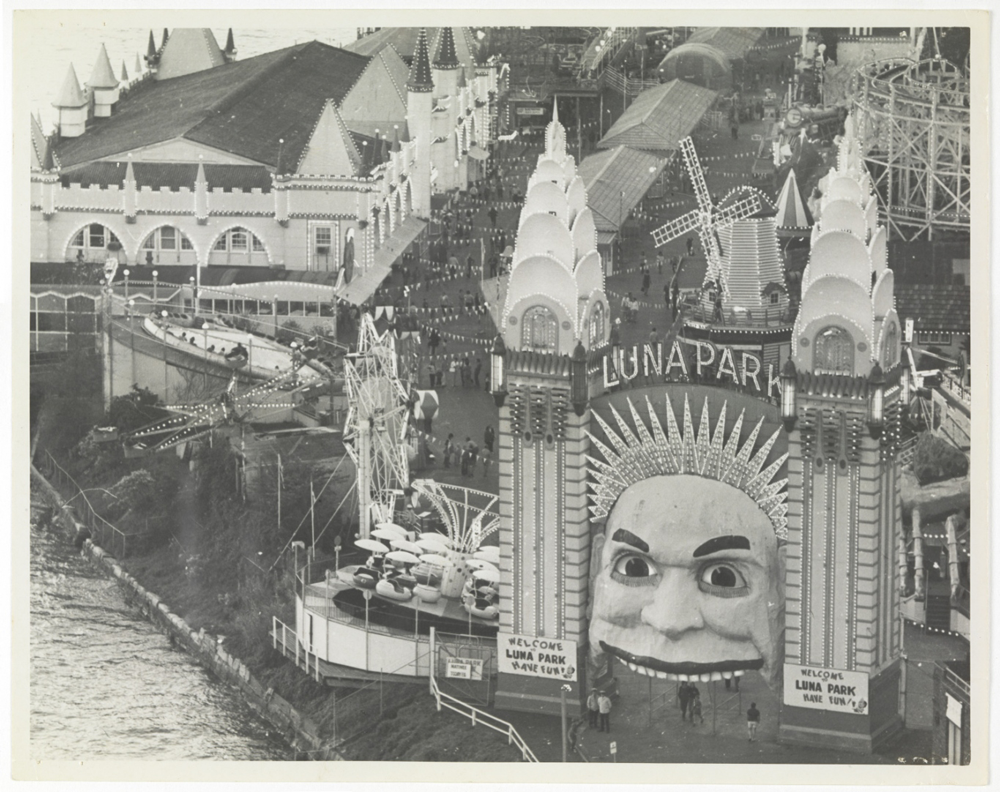 A "new" era begins at Luna Park – a new boss to take over. He is a former head of Fox Studios, the youngest CEO in the 87-year-old institution’s history. Now, let us retrace the importance and iconography of Luna Park.

Luna Park’s dramatic Face has kept watch over Sydney Harbour for 87 years. The Face and supporting towers, first built in 1935, join the Harbour Bridge and the Opera House as the three strongest symbols of the city.

The Face of Luna Park has been resting on the same site since it was dismantled … by the last operators in late 1988; that was year the Park closed. At that time, the fantasy towers flanking the Face were destroyed.

The origin of the idea of the Face as a gate is unknown. However, entering through a mouth symbolises one moving into another world.

Since 1935, Luna Park has had seven changes to its face; a new face modelled on the face that graced the entry from 1950 to 1970s will be built for Luna Park to mark its historic re-opening in 1994.

The Face is hung between two 36 metre high decorated towers, which are topped with spires modelled on the tip of New York’s Chrysler Building, which was completed in the 1930s. It is one of the most famous art deco buildings in the world.

The first Luna Park Face was designed by artist Rupert Brown; it was also Brown who designed the entry at Luna Park in St Kilda, Melbourne.

The fifth New Face, built in the 1950s, was the most famous and cherished of the Luna Park faces was designed by Park artist Arthur Barton. Barton was also responsible for major artworks around the Luna Park.

The Barton Face was used to entice people into the Park. In 1973, Martin Sharp, who was a Luna Park artist at the time, redesigned the ‘Barton face’, and created Face number six.

In the 1980s, the Luna Park sported a new Face, number seven, and a breakthrough: a new face constructed of fibreglass, the only face to survive.

The 1995 Face is modelled on Barton’s legendary 1950s big pink face. It will be crowned by a sunburst of lights to beam its welcome across the harbour, beckoning people to pay a visit and have fun.

Arthur Barton, Master of Arts and everything that goes with them

For 35 years, Arthur Barton created a special magic at Luna Park. His carnival artworks are outstanding because they offer the vital iconography of the Sydney amusement venue.

Barton’s humorous paintings are reflected in its motto perfectly – Just for Fun!

He was born in 1895. He grew up with his six brothers and sisters in Sydney. After World War 1 had ended – he was 23 at the time – he stayed in England and studied art.

He returned to Australia at the completion of his studies and quickly found out that he wasn’t a huge commercial success as a portrait artist. One of his portraits hung at an Archibald prize exhibition; and his water colours of pastoral scenes had a “warm, gentle glow”.

Barton’s great gift, he later discovered, was a having an eye for what children loved. Being a small man, it was easy to view things from a child’s perspective.

Parcelling up his childhood fantasies drew Barton to Luna Park.

The land for the park was a leftover from the construction of the new Harbour Bridge. 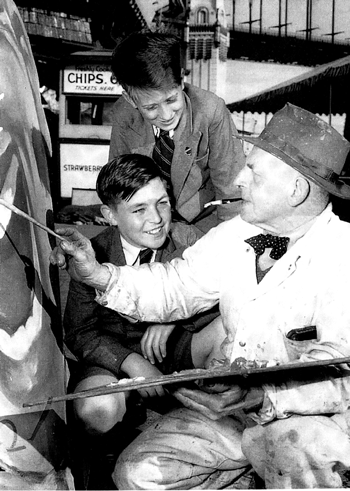 Barton scored the position of resident artist of Luna Park in October 1935.

He worked in papier mache, plaster of paris and enamel paints to create a bustling, apocryphal, romantic, surrealistic fantasy land.

The forthright characters, all sprung from Barton’s inspiration and ingenuity, were the talk of the town.

A former manager of Luna Park described Barton as a “man who made things work”.
Barton’s talents and energies extended beyond Luna Park. 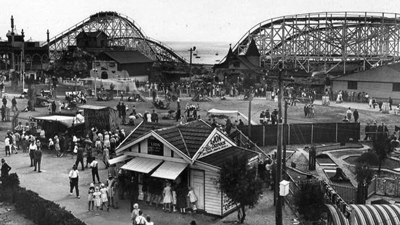 The structure of Luna Park was moved from Glenelg, but given the Sydney look.

He wrote reams of books, designed Christmas caves and became a sketch artist for Grace Bros, Framers and David Jones department stores. On top of this, he drew comic strips, on all subjects, which would capture children’s imagination.

Barton had a perpetual smile and a simple solution for a highly technical problem.

He grudgingly agreed to retire in 1970, then 81. When he conceded when his eyesight was beginning to fade. Arthur Barton died in 1974, aged 85.

His dynamism and creativity will live on …

Frank Morris comments: Opened in Sydney in 1935, Luna Park was recognised by the art deco-style fantasy face and concept. It was based on the success of Coney Island, New York, in 1903. Herman Phillips, a well-known American entrepreneur, brought the idea to Australia and opened Luna Park Melbourne in 1912 and Luna Park Glenelg in Adelaide in 1930 which was moved to Sydney in 1934.

Main: The many faces of Luna Park. Below: The checkerboard concept of Luna Park on opening day.